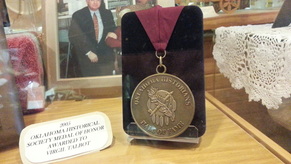 In addition to founding the Talbot Library and Museum, Virgil Talbot was also publisher  of the Goingsnake Messenger and TL&M Genealogy magazines. He also wrote several books regarding his family and his wife's (Avis) family, as well as local history books and poetry.

Virgil's motto was "Preserving a Bit of History".  He was very dedicated to this purpose.  He worked very hard at collecting and preserving historical and genealogical material that would be available for generations.

More about Virgil Talbot and TL&M

What's in a name?  Talbot Library and Museum....
Did Virgil Talbot Fully Understand What He Began?