Contents of past T.L.&M Issues 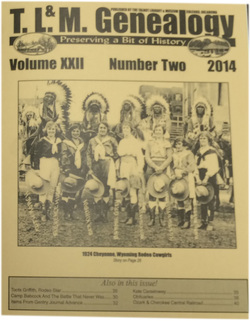 Contents of Past Issues of the TL&M “T.L. & M. GENEALOGY MAGAZINE” are available.
Prior to 2015, TL&M was published 3 times a year.
Beginning in 2015, TL&M will be published in two expanded editions per year.

If you are interested in back issues, you can order by mail with this printable order form:
Printable Order Form

PAST ISSUES,    TABLE OF CONTENTS LISTINGS:

MARCH 1993, VOLUME I, #1,
Consists of free 2 page newsletter: Lists some of the books in the Library
Donation from Lulu Boggs, consisting of Dawes applications, etc.